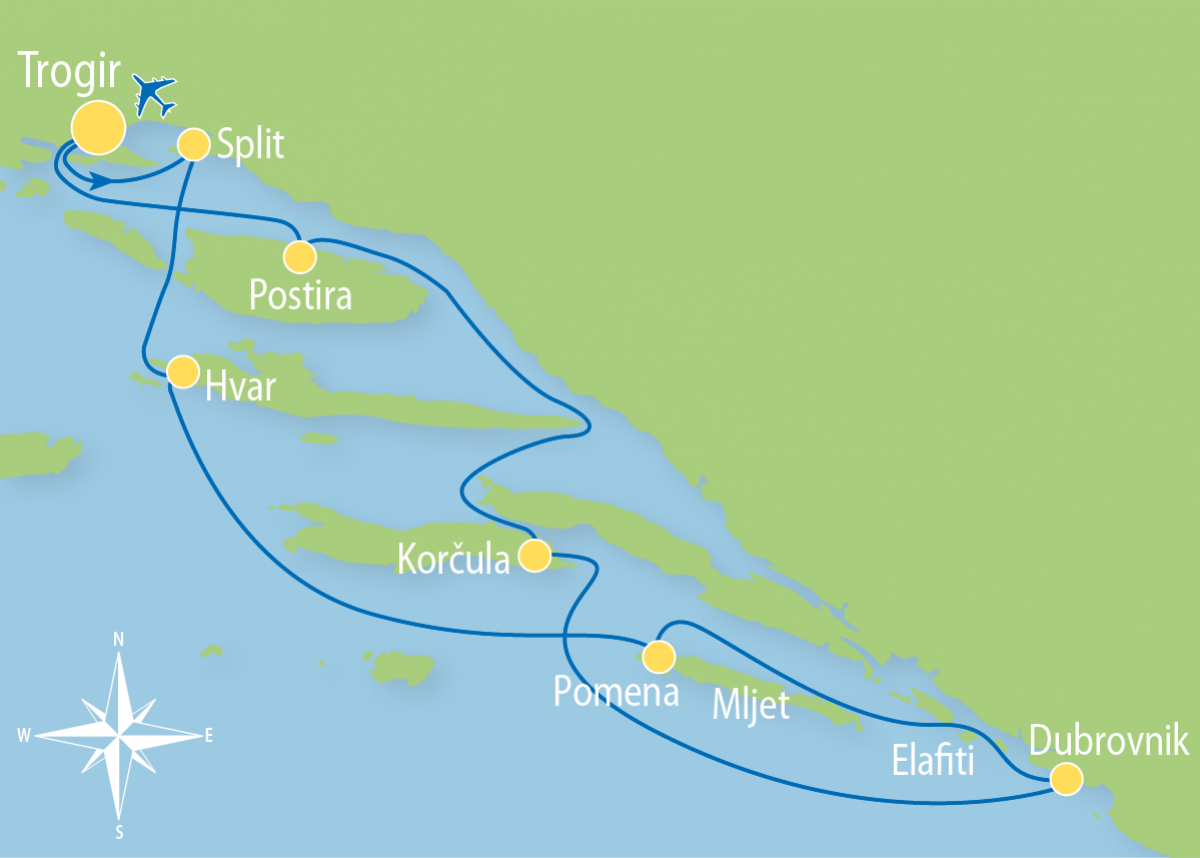 Between 1:00 pm and 2:00 pm boarding at the port of Trogir. If you arrive in Trogir by your own car, you can drive to our car park reception from 10:00 am until 1:00 pm at the latest. Here you can park your car and our service team will bring your luggage to the port or to the ship in time. You will reach the harbour in about ten minutes on foot (approx. 1,100 m) via the pedestrian bridge.. After embarkation, our representatives will welcome you aboard with a drink and you will meet the crew and your fellow passengers. During a lunch snack after embarkation, “Cast off!”. We stop in one of the bays on the island of Čiovo, where we will have our first chance to dip into the crystal-clear water of the Adriatic Sea. After having enjoyed swimming and sunbathing, we will set sail for Split, our first port of call. Split is Croatia’s second largest city and the capital of Dalmatia. The 1700-year-old city was once the palace of the Roman Emperor Diocletian, and is today a UNESCO-protected site. After a guided city tour, you will have the rest of the evening at your disposal to discover the old town on your own and to enjoy the bustling Mediterranean atmosphere on the famous promenade of Split.
The port of embarkation for passengers arriving by plane depends on the flight schedule. With transfer booking via I.D. Riva Tours and flight arrival to Split airport until 01:00 pm, embarkation in the port of Trogir is guaranteed. Passengers arriving later will be transferred to the first port of call for embarkation. Overnight stay in the port of Split.

Today we will leave Split, heading to the island of Hvar known for its mild climate and fragrant lavender fields. On our way to Hvar, we will stop in a secluded bay for a swim. After having reached Hvar, we will anchor in the port of Hvar, the homonymous capital of the island. The port lies at the foot of an impressive fortress, which offers spectacular views of the offshore islands “Pakleni otoci”. Provided that the number of boats anchoring in the small port of Hvar allows us to do so, we will stay here overnight. Otherwise, we will approach Hvar already in the morning and you will have two hours time to explore the island`s capital. In this case, we then continue our journey to the next island.

Tuesday: Island of Hvar–Island of Mljet

Sailing along the south coast of the island of Korčula, we will stop at one of the numerous bays for a swim, before heading to our next port of call – Pomena or Polače, on the island of Mljet. Part of the island was declared a National Park – two saltwater lakes (in the larger of the two lakes you will find a small island with a former monastery) are connected to the sea by a narrow channel. Do not miss the opportunity to visit the National Park (entrance fee incl. boat ride to the small monastery island approx. 17 €, payable on-site). We recommend a swim in the saltwater lakes, where the temperature is always 2°C above the temperature of the sea. Overnight stay in Pomena or Polače.

We leave the island of Mljet and continue our journey. After a swimming break at the Elafiti Islands, we will enter the port of Dubrovnik around 4:00 pm. Dubrovnik is also called the “Pearl of the Adriatic”, since in the Middle Ages the city counted among the most important economic and cultural centres of the Mediterranean area. Today, the Old City unfolds a unique open air museum with countless attractions. After arriving in Dubrovnik, we are invited to enjoy a guided tour through the historic town with its impressive walls. It takes only a few minutes by bus to get to the old town. The bus stop is located right next to the port, the bus leaves every 10 minutes, last return journey around 2:00 am. Tickets are available from the kiosk (12 Kuna per ride) or on the bus (15 Kuna per ride). After the guided city tour, you will have plenty of time to discover the gems of Dubrovnik on your own. Stroll through the famous “Stradun”, take a walk along the massive city walls and visit the numerous unique sights or take the cable car to the 415 m high mountain Srđ, from which you can enjoy a unique view of the old town and the sea.

Continuing our cruise in a northwestward direction, we will first stop in a bay of the Elafiti Islands for swimming and sunbathing, before heading to the island of Korčula – our today’s port of call. Korčula boasts one of the most beautiful old towns in Dalmatia and because of its fortress-like appearance it is often called “Little Dubrovnik”. Overnight stay in the birthplace of the famous sailor and explorer Marco Polo.

Friday: Island of Korčula–Island of Brač

Passing the mountainous Pelješac Peninsula, we head towards the island of Brač. On our way to Brač, we will stop in one of the beautiful secluded bays of this area for swimming and sunbathing. The island of Brač is not only well-known for its white limestone. Even world-famous buildings like the White House in Washington and the Reichstag building in Berlin are built with the stone, which still today is exported to countries all over the world. Brač is also known for being one of the largest islands in the entire Adriatic Sea. Overnight stay in one of the lovely places in the northern part of the island – the perfect setting for tonight’s Captain’s Dinner.

We leave the island of Brač and after a swimming break in a bay on the island of Čiovo, we will bid farewell to the Dalmatian islands and return to the starting point of our journey, Trogir, with its beautiful old town, protected by the UNESCO and also called “the Museum City”. Enjoy the experience of a guided walking tour through the winding streets and discover impressive walls, towers, churches, frescoes and vaults. Do not miss out on taking a look into the unique old yards. Enjoy the last evening of your cruise with a romantic dinner at one of Trogir`s numerous restaurants.