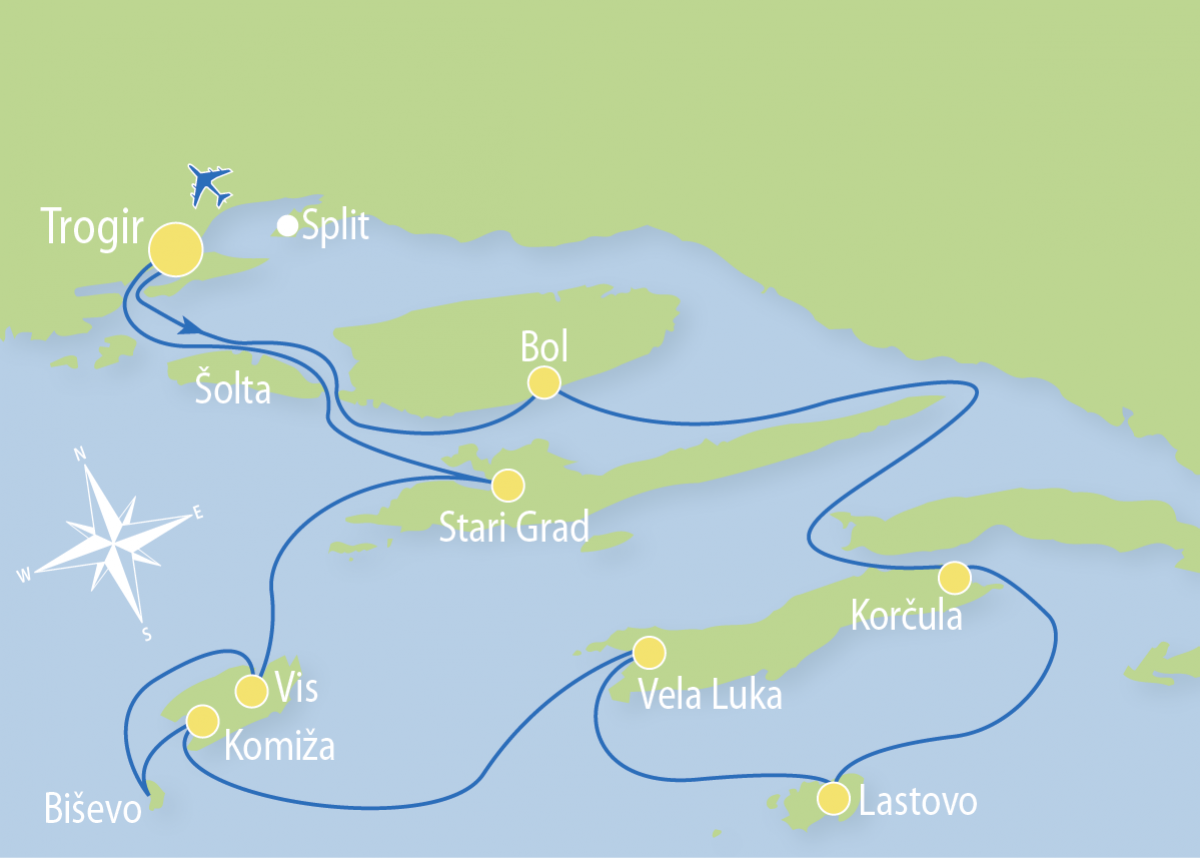 Between 1:00 pm and 2:00 pm boarding at the port of Trogir. If you arrive in Trogir by your own car, you can drive to our car park reception from 10:00 am until 1:00 pm at the latest. Here you can park your car and our service team will bring your luggage to the port or to the ship in time. You will reach the harbour in about ten minutes on foot (approx. 1,100 m) via the pedestrian bridge. After embarkation, our representatives will welcome you aboard with a drink and you will meet the crew and your fellow passengers. During a lunch snack after embarkation, “Cast off!”, heading towards Bol, on the island of Brač. Here you will discover one of the most beautiful beaches in the entire Mediterranean – “Zlatni Rat” (the Golden Horn), which is constantly changing direction due to the ocean currents. Dinner on board and overnight stay in the port of Bol.
The port of embarkation for passengers arriving by plane depends on the flight schedule. With transfer booking via I.D. Riva Tours and flight arrival to Split airport until 01:00 pm, embarkation in the port of Trogir is guaranteed. Passengers arriving later will be transferred to the first port of call for embarkation.

Sunday: Island of Brač–Island of Korčula

Today’s destination is the town of Korčula, the main town on the homonymous island. Korčula has one of the most beautiful old towns in Dalmatia and due to its fortress-like appearance, it is often named “Little Dubrovnik”. On our way to Korčula, we will stop in a bay to take a swim in the crystal-clear water. Overnight stay in the birthplace of the famous navigator and explorer Marco Polo.

In around three hours by boat from Korčula we will reach the island of Lastovo, which has been closed to foreign visitors for decades, since it used to be a military base at the time of the former Yugoslavia. The island has preserved its authenticity and is therefore an oasis of tranquillity, with lush Mediterranean vegetation. A few years ago, the archipelago of Lastovo was declared a natural park (entrance fee approx. € 4 per person, to be paid on-site). We anchor in the bay of Sveti Mihajlo, close to the village of Lastovo, where you will have plenty of time for exploring the surroundings. In the afternoon, we will return to the island of Korčula, more precisely to Vela Luka. The village lies in a deep, sheltered bay at the western end of the island. In case of bad weather, instead of Vela Luka, we will anchor in the port of Ubli, on the island of Lastovo for our overnight stay.

Tuesday: Island of Korčula–Island of Vis

After a swim break, we head for the second "forbidden" island of our trip today – Vis. Like Lastovo, the island of Vis was closed to foreign visitors until the end of the 1980s. Where once there was the runway of an air force base, wine is now grown. If possible, we first visit the "Blue Grotto" on the islet of Biševo. As the visit to the cave depends on the weather, it will take place on Tuesday or Wednesday, if feasible, according to the weather forecast. Depending on the local conditions, we will anchor for the night in a bay or moor in Komiža, a tranquil little town on the west coast of the island of Vis.

Just five nautical miles from Komiža there is the small island of Biševo, with the famous “Blue Cave” (Modra Špilja). Around midday, the rays of the sun will spill through an underwater opening into the cave and reflect from the white ocean floor, thus bathing the cave into blue light. This unique manifestation can be observed only in calm seas. The trip to the cave is done with small boats – admission incl. boat ride about € 10 per person (€ 14 in July/August), not included in the tour price. On our trip to Vis, the capital of the island, we anchor in a bay on the northern coast for a swim. The town of Vis is situated in a deep, sheltered bay. Vis is a charming little town with romantic alleys and cafés. In one of the many quaint Konobas you can let the evening end wonderfully.

Thursday: Island of Vis–Island of Hvar

After breakfast, we weigh anchor and head towards the last island of our voyage – Šolta. The island is characterized by extensive olive groves, which produce first-class, extremely dark olive oil. For swimming, we anchor in a secluded bay which is accessible only by boat. Back from Šolta, we return to Trogir. Be captivated by the unique atmosphere in the streets of the old town, also called “the Museum City” and protected by the UNESCO. Before having the opportunity to have dinner in one of the numerous cozy restaurants, you are invited to take part in a guided tour through the historic town.

After breakfast, disembarkation until 9:00 am.
What's included…
* 8-day cruise according to the itinerary
* Half board (including dinner on embarkation day, and breakfast and lunch or dinner on the following days of your cruise)
* Welcome snack
* Captain's Dinner
* English and German speaking representatives during embarkation and disembarkation
* Guided city tour of Trogir