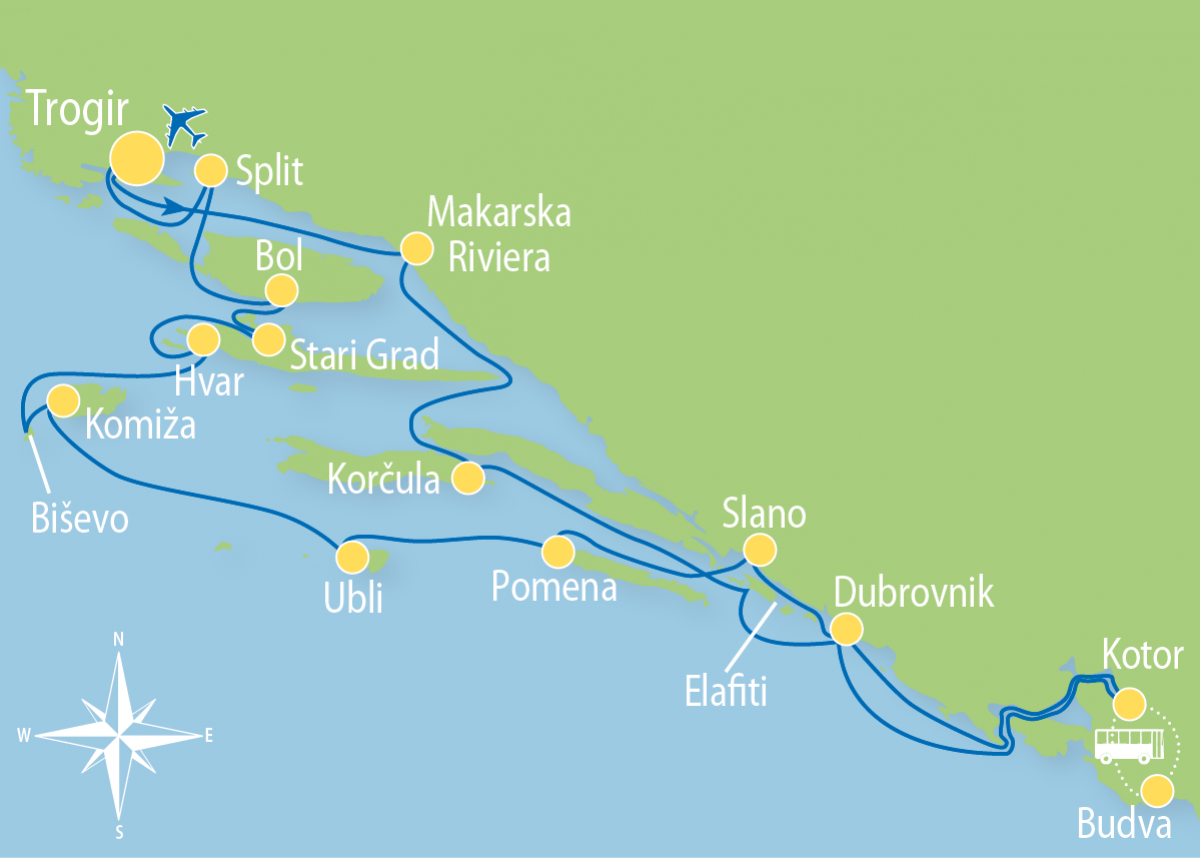 Between 1:00 pm and 2:00 pm boarding at the port of Trogir. If you arrive in Trogir by your own car, you can drive to our car park reception from 10:00 am until 1:00 pm at the latest. Here you can park your car and our service team will bring your luggage to the port or to the ship in time. You will reach the harbour in about ten minutes on foot (approx. 1,100 m) via the pedestrian bridge. After embarkation, our representatives will welcome you aboard with a drink and you will meet the crew and your fellow passengers. During a lunch snack after embarkation, "Cast off!. We anchor in a bay on the island of Čiovo for our first swim, before continuing to the Makarska Riviera. Overnight stay at the Makarska Riviera.
The port of embarkation for passengers arriving by plane depends on the flight schedule. With transfer booking via I.D. Riva Tours and flight arrival to Split airport until 01:00 pm, embarkation in the port of Trogir is guaranteed. Passengers arriving later will be transferred to the first port of call for embarkation.

Passing the islands of Brač and Hvar, we will set sail towards the peninsula of Pelješac, known for its excellent red wine. After a long swimming break at Pelješac, we will head for the island of Korčula. Korčula has one of the most beautiful old towns in Dalmatia. Overnight stay in the birthplace of the famous sailor and explorer Marco Polo.

We continue our voyage and stop for a swim in one of the bays of the island of Mljet. Our today’s destination are the Elaphiti islands. Overnight stay in the fishermen’s village of Suđurađ on the island of Šipan or in a bay.

After breakfast, we weigh anchor and sail towards Dubrovnik where we will pass the customs formalities. After about three and a half hours, we will reach the southern end of Croatia and leave the Croatian territorial waters, heading towards Montenegro. We turn into the Bay of Kotor, which, surrounded by high mountains, extends 25 km into the mainland. We sail deeper into the Bay of Kotor and pass the small island "Gospa od Škrpjela" ("Lady of the Rocks"). After arriving in Kotor and passing the customs formalities, a tour guide is going to take us on a city tour. The city walls of Kotor are certainly unique - they embrace not only the small triangular city centre, but also the mountain Sveti Ivan (260 m) right behind it. The city walls are 5 km long, 3-15 m wide and up to 20 m high. Enjoy a guided walk through Kotor with its impressive walls and many lovely sights and secrets to discover. Overnight stay in Kotor.

After breakfast, the tour guide will already be waiting to accompany us on a full-day bus trip through the beautiful “Land of the Black Mountains”. From Kotor, we will go by bus to the Lovčen massif, from where we will have an incredible panoramic view over the whole bay of Kotor. We will stop in the village of Njeguši, best known for its air-dried ham. Enjoy a culinary break with ham, cheese and freshly baked bread, accompanied by a glass of red wine “Vranac”. We continue to Cetinje, Montenegro’s former capital and the former seat of the Montenegrin kings. During the city tour we will also visit the palace of King Nikola of Montenegro, which now is a museum. We drive to the coast and make a photo stop overlooking the little island of Sveti Stefan. We then continue on to Budva, the main holiday destination on the Montenegrin coast. Guided tour around the picturesque Old Town. Afterwards you will have some free time to stroll through the town or to enjoy a cup of coffee. And if you have brought your bathing suit, we recommend a visit to the beautiful beach of Mogren, just five minutes from Budva’s Old Town. Return to the boat; overnight stay in Kotor.

We leave Kotor during breakfast. After about six hours, we will reach Dubrovnik. After another passport control, our tour guide is going to pick you up for a guided tour of the historic town with its impressive walls. Dubrovnik is also called the "Pearl of the Adriatic", since in the Middle Ages the city counted among the most important economic and cultural centres of the Mediterranean area. Today, the Old City unfolds a unique open air museum with countless attractions. It takes only a few minutes by bus to get to the old town. The bus stop is located right next to the port, the bus leaves every 10 minutes, last return journey around 02:00 am. Tickets are available from the kiosk (12 Kuna per ride) or on the bus (15 Kuna per ride). After the guided city tour, you will have plenty of time to discover the gems of Dubrovnik on your own. Stroll through the famous "Stradun", take a walk along the massive city walls and visit the numerous unique sights or take the cable car to the 415 m high mountain Srđ, from which you can enjoy a unique view of the old town and the sea.

Morning in Dubrovnik. At lunchtime, we will say goodbye to the “Pearl of the Adriatic” and head towards the Elafiti Islands where we will anchor in one of the numerous bays to have a bath in the crystal clear water. We continue to Slano where we will stay overnight.

We will serenely cruise to Pomena or Polače, on the island of Mljet. Part of the island was declared National Park – two saltwater lakes (in the larger of the two lakes there is a small island with a former monastery) are connected to the sea by a narrow channel. Do not miss the opportunity to visit the National Park (entrance fee incl. boat ride to the small monastery island approx. 17 €, payable on-site). We recommend a swim in the saltwater lakes, where the temperature is always 2°C above the temperature of the sea.

Sunday: Island of Mljet–Island of Lastovo

We sail to the island of Lastovo, which was closed to foreign visitors for decades, since it used to be a military base at the time of former Yugoslavia. The island has preserved its authenticity and is therefore an oasis of tranquillity, with lush Mediterranean vegetation. A few years ago, the archipelago of Lastovo was declared a natural park (entrance fee approx. € 4 per person, to be paid on-site). After a swimming break, we will anchor at the port of Ubli, or in the sheltered bay Velo Lago. Since the trip to the island of Lastovo depends on the weather conditions, in case of bad weather we will sail to Vela Luka on the island of Korčula.

Monday: Island of Lastovo–Island of Vis

Today we will visit the second “forbidden” island of our journey – Vis. The island of Vis was, just like Lastovo, closed to foreign visitors until the end of the 1980s. Where there was once an Air Force runway, now there are vineyards. We will be staying in the port of Komiža, a peaceful town on the west coast.

Tuesday: Island of Vis–Island of Biševo & Blue Cave–Island of Hvar

Just five nautical miles from Komiža, there is the small island of Biševo, with the famous “Blue Cave” (Modra Špilja). Around midday, the rays of the sun will spill through an underwater opening into the cave, and reflect from the white ocean floor, thus bathing the cave into blue light. This unique sight can be observed only in calm seas. The trip to the cave is done with small boats – admission incl. boat ride about € 10 per person (€ 14 in July/August), not included in the tour price. From Biševo we set off for Hvar – the island is known for its mild climate and vast lavender fields. The harbour of the homonymous main town lies at the foot of an island fortress, from which you will have a fantastic panoramic view over the offshore island group of “Pakleni otoci”. Provided that the number of boats anchoring in the small port of Hvar allows us to do so, we will stay here overnight. Otherwise, we will approach Hvar already in the afternoon and you will have enough time to explore the island`s capital, before we head for a nearby bay to spend the night there.

Wednesday: Island of Hvar–Island of Brač

We continue to Stari Grad, the oldest settlement on the island of Hvar. Stari Grad (translated: old town), once called “Pharos”, used to be the capital of the island. Even today, well-preserved monuments bear witness of the splendour of times past, like the Palace of Hektorović. Stari Grad has, however, kept its role as the centre of viticulture. From Stari Grad, we sail to Bol, on the island of Brač. Here you can visit Dalmatia’s most famous beach – Zlatni Rat (the Golden Horn), which changes its direction with the ocean currents. Of course, you will have plenty of time for swimming and sunbathing at this famous beach. Overnight stay in the port of Bol.

Our today’s destination is Split, Croatia’s second largest city and capital of Dalmatia. The 1700 years old city was once the palace of the Roman Emperor Diocletian, and is today under the protection of the UNESCO. After a guided city tour, the rest of the evening is at your disposal to discover the old town on your own. Overnight stay in the port of Split.

Around 11:00 am, we leave Split and sail to a cove of the island of Čiovo to enjoy the last swim in the waters of the Adriatic Sea. Then we will return to the starting point of our two weeks voyage, Trogir, with its beautiful old town, protected by the UNESCO, also called “the Museum City”. Enjoy the experience of a guided walking tour through the winding streets and discover impressive walls, towers, churches, frescoes and vaults. Do not miss out on taking a look into the unique old yards. Enjoy the last evening of your cruise with a romantic dinner at one of Trogir`s numerous restaurants.

Update for the 2021 season: Due to the current situation regarding the Covid 19 pandemic, Kotor will not be served and the bus excursion through Montenegro cannot take place.