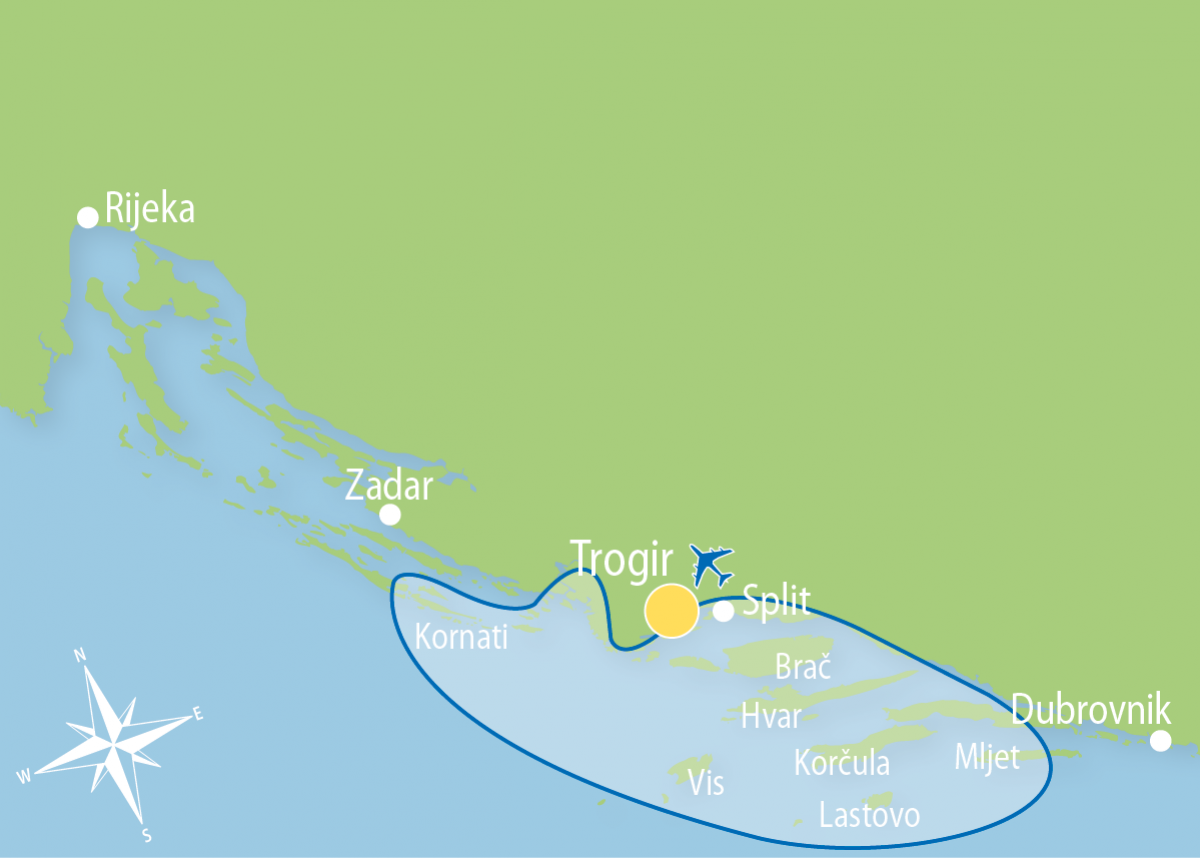 Our captain's routes don't follow a set route. Rather, we leave it to the captain with his many years of experience, depending on the weather and in consultation with his guests, to put together an unforgettable cruise week.
A Friday evening in July, aboard the MY Mystic: We asked Captain Arsen how he would organise the Captain's Route from Trogir:
Of course, I don't sail on a fixed route, but also ask my guests what they would like to see. But basically, I avoid overnight stays on the mainland, because it is much quieter on the islands. On the island of Brač I like to go to the cosy fishing village of Postira, in whose harbour we are sometimes the only ship. Or the tranquil place of Milna, which lies in a deeply cut, protected bay. After that, the island of Hvar is usually on the agenda. While in the port of Hvar often up to 30 ships stay overnight at the same time, I choose the small places Jelsa and Vrboska on the northern side of the island. They really have preserved a large part of their originality, and unlike the town of Hvar, the loudspeaker boxes of the cafés and bars do not boom here until the early hours of the morning. And then, of course, there is the "forbidden island“–- Vis. The island was a military restricted area until the end of the 1980s, and foreign visitors were denied entry. This is why mass tourism has never developed here. My first destination on the island is usually the town of Vis with its typical mediterranean hustle and bustle in midsummer, before I head for the smaller town of Komiža, on the other side of the island the next day. And if we are already in Komiža, of course we will not miss the nearby islet of Biševo, where my guests have the opportunity to visit the famous "Blue Cave“ by small boats. Of course, this is not a fixed program, but depends on the wishes of my guests, and of course on the weather.
Route:
Exclusive Captain's Route – the insider tip for individualists
The Captain's Route ex Trogir:

* From 1:00 pm to 2:00 pm, boarding time in the port of Trogir.
* The port of embarkation for passengers arriving by plane depends on the flight schedule. With transfer booking via I.D. Riva Tours and flight arrival to Split airport until 01:00 pm, embarkation in the port of Trogir is guaranteed. Passengers arriving later will be transferred to the first port of call for embarkation.
* The itinerary is not prescribed, but created by the captain in a flexible way. Considering wheather and sea conditions, he will show you his favourite bays and places.
* At least two nights in sheltered coves and small fishing villages.
* A maximum of three nights in major towns, visited by the route T1, possibly not on the same days as other ships.
* Whenever possible, the group will avoid meeting groups from other boats and sharing overnight locations.
What's included…
* 8-day cruise according to the itinerary
* Half board (including dinner on embarkation day, and breakfast and lunch or dinner on the following days of your cruise)
* Welcome snack
* Captain's Dinner
* English and German speaking representatives during embarkation and disembarkation
* Guided city tour of Trogir