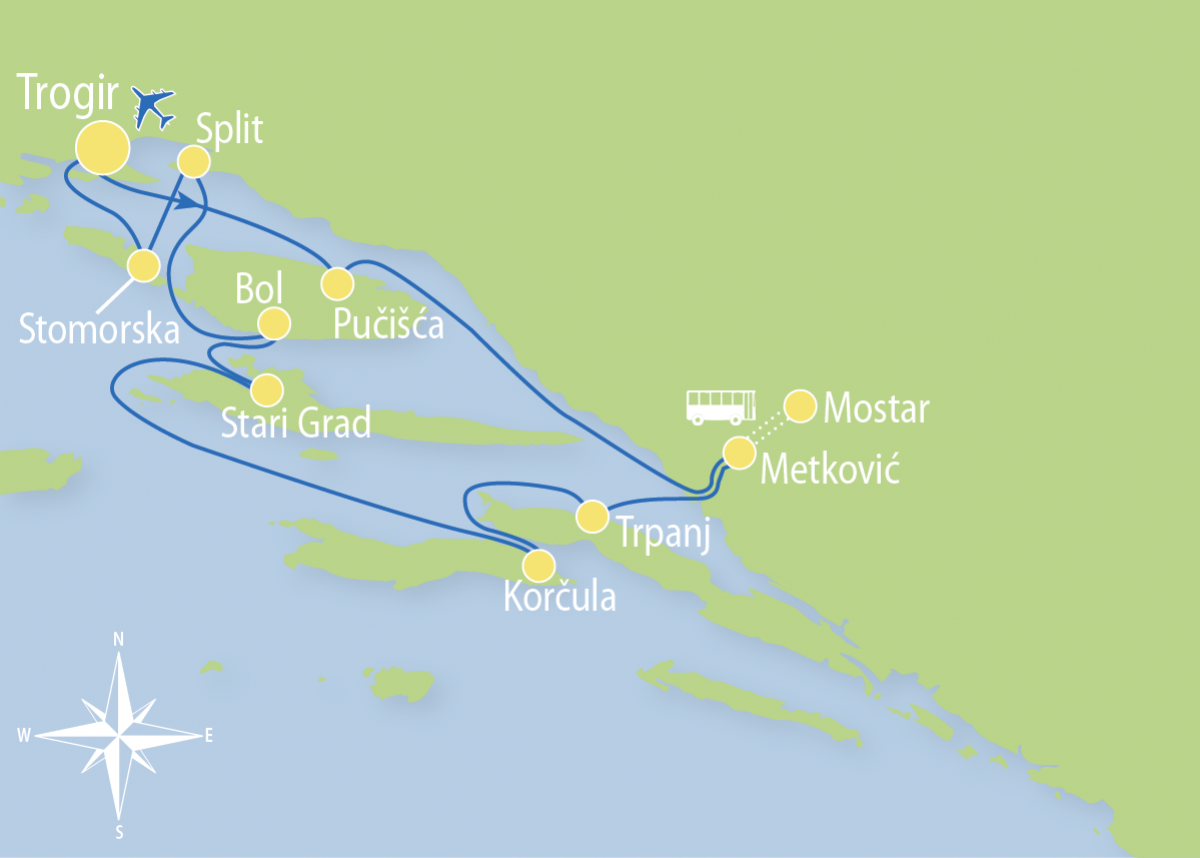 Between 1:00 pm and 2:00 pm boarding at the port of Trogir. If you arrive in Trogir by your own car, you can drive to our car park reception from 10:00 am until 1:00 pm at the latest. Here you can park your car and our service team will bring your luggage to the port or to the ship in time. You will reach the harbour in about ten minutes on foot (approx. 1,100 m) via the pedestrian bridge. After embarkation, our representatives will welcome you aboard with a drink and you will meet the crew and your fellow passengers. During a lunch snack after embarkation, “Cast off!”, we will stop in one of the bays on the island of Čiovo, where we will have our first chance to dip into the crystal-clear waters of the Adriatic Sea. Afterwards, we will continue our voyage to Pučišća. The picturesque place is located on the island of Brač, which is not only well-known for its white limestone. Even world-famous buildings like the White House in Washington and the Reichstag building in Berlin are built with the stone, which still today is exported to countries all over the world. Brač is also known for being one of the largest islands in the entire Adriatic Sea. Dinner aboard and overnight stay in Pučišća.
The port of embarkation for passengers arriving by plane depends on the flight schedule. With transfer booking via I.D. Riva Tours and flight arrival to Split airport until 01:00 pm, embarkation in the port of Trogir is guaranteed. Passengers arriving later will be transferred to the first port of call for embarkation.

Today we will continue our cruise in southeastern direction, heading to the port of Ploče, where we will leave the Adriatic Sea to enter the Neretva River Delta. After an upstream passage of approx. 90 minutes, we will reach Metković, the center of the Neretva River Delta, an area of 20,000 hectares. It was originally a pure swamp; however, in 1880 parts of it were drained so the land could be used for agricultural purposes. Hence came to life the largest tangerine cultivation in the Adriatic area, also called the “Croatian California”. The area boasts of a rich flora and fauna. In addition to a variety of plants, here you may find more than 300 bird species as well as 100 different fish species. Upon arrival in Metković, minibuses will take us to the nearby village of Vid, where we will visit the archeological museum "Narona" (an entrance fee of approx. 3.50 € applies; subject to be paid on site). After our visit to the museum, we will board the “Lađas”. After having enjoyed a typical local welcome drink, we are ready to start our boat trip on the Norin River and the channels of the Neretva River Delta, which will take approx. 90 minutes. In Momići, you will have the opportunity to have dinner at the Restaurant “Lopoč” before returning to Metković. Overnight stay in Metković.

After breakfast, a bus will take us to Mostar, the capital of Herzegovina, the part of Bosnia-Herzegovina, which is predominantly populated by Croats. After arriving in Mostar, we will have lunch, and afterwards we are invited to enjoy a guided walk through the historic town. The town’s landmark and eponym of Mostar, the “Old Bridge” over the Neretva River, was built in the 16th Century. It was destroyed during the war in 1993 and reconstructed in the years from 1996 to 2004. In 2005, the bridge and the old town of Mostar were included in the UNESCO’s list of world cultural heritage. Near the bridge, there is the Karadjoz-Beg Mosque, which is open to visitors. After the guided walk, we will return to the vessel and continue our cruise, heading downstream, back to the Adriatic Sea. We will spend the night in the little village of Trpanj, located on the beautiful Pelješac peninsula.

The unique peninsula of Pelješac is dominated by an impressive mountain range with its highest peak, named Sveti Ilija (961 m). Being the second largest Croatian peninsula, Pelješac is also well known as the producing area of famous wines like Postup and Dingač. We will cruise along the northwestern tip of the peninsula, before continuing our voyage to the island of Korčula. In olden times, Korčula was also called the “Black Island”, because of its vast pine forests, which used to cover the entire island. Before entering the port of Korčula, we will make a stop in a secluded bay, where we will have plenty of time for swimming and enjoying the sun. Korčula, the homonymous capital of the island, has one of the most beautiful old towns in Dalmatia, and because of its fortress-like appearance, it is often referred to as “Little Dubrovnik”. Enjoy a guided tour through the birthplace of the famous sailor and explorer Marco Polo. Overnight stay in Korčula.

Wednesday: Island of Korčula–Island of Hvar

From Korčula we set off for Hvar – the island is known for its mild climate and vast lavender fields. On our way to Hvar we will stop at the small island of Šćedro to take a refreshing dip in a beautiful bay. Afterwards we will continue to Stari Grad, the oldest settlement on the island of Hvar. Stari Grad (translated: old town), once called “Pharos”, used to be the capital of the island. Even today well-preserved monuments bear witness of the splendour of times past, like the Palace of Hektorović. Stari Grad has, however, kept its role as the centre of viticulture. Overnight stay in Stari Grad.

After breakfast, we will sail to Bol, located on the island of Brač. Here you will discover one of the most beautiful beaches in the entire Mediterranean area – “Zlatni Rat” (the Golden Horn), which is constantly changing direction due to the ocean currents. After a swimming break in the vicinity of this beach, we will weigh anchor, continuing our voyage to Split. Passing the famous sea gate “Splitska Vrata”, we will reach the capital of Dalmatia. The 1700 years old city was once the palace of the Roman Emperor Diocletian, and is today under the protection of the UNESCO. After a guided city tour, the evening is at your disposal to discover the old town on your own. Overnight stay in Split.

After breakfast, we will return to the islands once again. Today’s destination is the island of Šolta or the island of Čiovo. We will head for an awesome bay to enjoy our last refreshing dip on this cruise. In the afternoon, we will return to the starting point of our cruise – Trogir. With its amazing old town, protected by the UNESCO, Trogir is also called “the Museum City”. Enjoy the experience of a guided walking tour through the winding streets and discover impressive walls, towers, churches, frescoes and vaults. Do not miss out on taking a look into the unique old yards. Enjoy the last evening of your cruise with a romantic dinner at one of Trogir`s numerous restaurants.

After breakfast, disembarkation until 9:00 am.
What's included…
* 8-day cruise according to the itinerary
* Half board (including dinner on embarkation day, and breakfast and lunch or dinner on the following days of your cruise)
* Welcome snack
* Captain's Dinner
* English and German speaking representatives during embarkation and disembarkation
* Neretva River Delta boat tour (welcome drink included)
* Bus excursion to Mostar, accompanied by a tour guide (lunch included)
* Guided city tour of Split
* Guided city tour of Trogir

Current information for the 2021 season: Due to the current situation regarding the Covid 19 pandemic, the bus excursion to Mostar cannot take place.

Differing for port of embarkation Dubrovnik: Sojourn tax and grounding are € 35 per person and week in the 2022 season, € 17 for children up to 12 years.