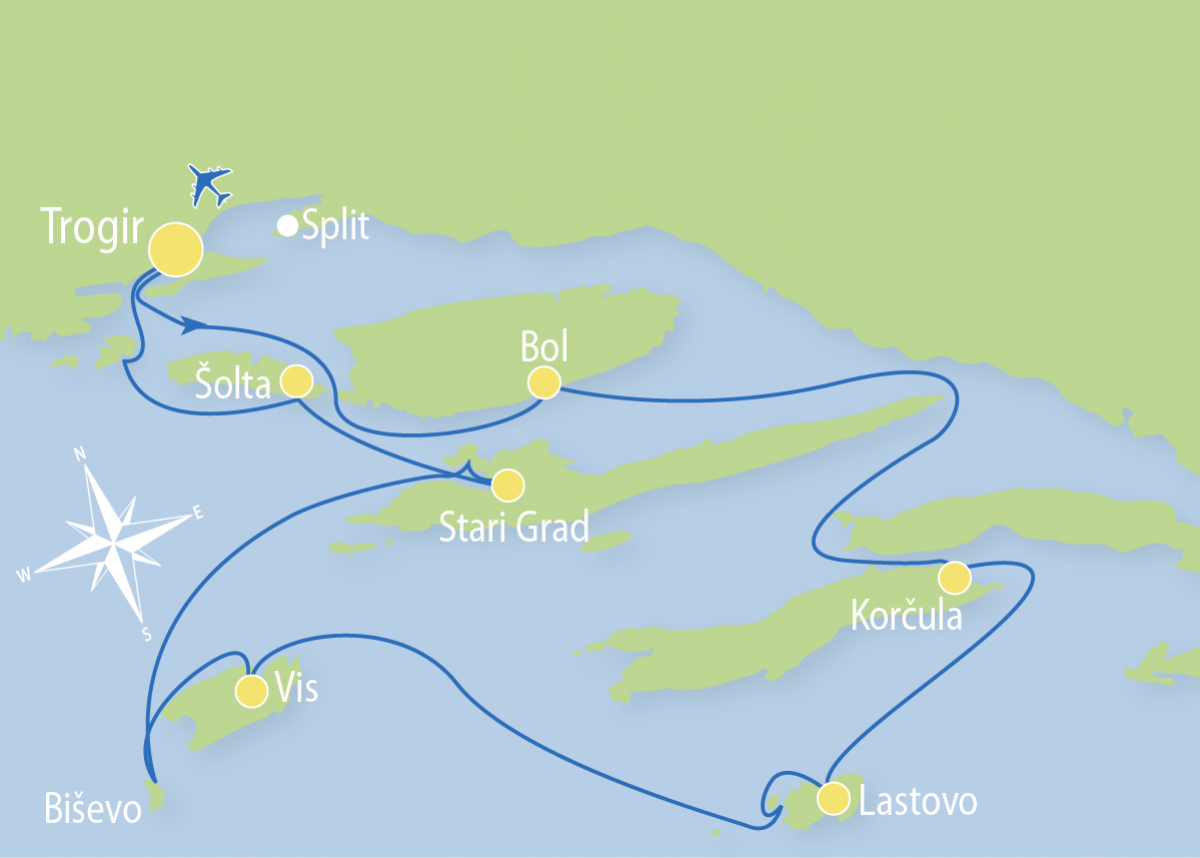 Naturism has almost 60 years of tradition in Croatia. As early as 1961, the nudist holiday resort Koversada was opened on the Limfjord in Istria, one of the largest of its kind in Europe. You will find beaches reserved for nudists practically along the entire Croatian Adriatic coast, as well as countless unofficial beaches and beach sections where almost exclusively naturists meet. In short, nudism is widely accepted in Croatia. What could be more natural than to tan seamlessly on the deck of a boat, and dive into the crystal-clear waters of lonely bays without using textiles? After we have already successfully carried out nudist cruises from Rijeka, we expanded our offer in 2020 with such a route from Trogir with our MS Mirabela as well. For the extra long bathing breaks, lonely bays will be called whenever possible, so that you can "drop the hulls" undisturbed. True to the motto "Hand in hand with the nature", overnight stays will take place in small fishing villages or lonely bays.

Between 1:00 pm and 2:00 pm boarding at the port of Trogir. If you arrive in Trogir by your own car, you can drive to our car park reception from 10:00 am until 1:00 pm at the latest. Here you can park your car and our service team will bring your luggage to the port or to the ship in time. You will reach the harbour in about ten minutes on foot (approx. 1,100 m) via the pedestrian bridge. After embarkation, our representative will welcome you with a welcome drink and introduce you to the crew and other passengers. During a lunch snack after embarkation, we weigh the anchor and sail towards Bol on the island of Brač. Here is one of the most beautiful beaches of the whole Mediterranean – "Zlatni Rat" (Golden Horn), which changes its direction constantly with the ocean current – a real miracle of nature. Dinner on board and overnight stay in the harbour of Bol.
The port of embarkation for passengers arriving by plane depends on the flight schedule. With transfer booking via I.D. Riva Tours and flight arrival to Split airport until 01:00 pm, embarkation in the port of Trogir is guaranteed. Passengers arriving later will be transferred to the first port of call for embarkation.

Sunday: Island of Brač–Island of Korčula

Our today’s destination is the island of Korčula. Already early in the morning we set sails, and after a swimming break and lunch on board we call in the early afternoon the city of Korčula, the main place of the island of the same name. Korčula has one of the most beautiful old towns of Dalmatia and is often called "Little Dubrovnik“, because of its fortress-like appearance. You have about two hours to discover the birthplace of the famous sailor and explorer Marco Polo, before we continue to a lonely bay. There you have the possibility to jump into the cool water as long as you like. Dinner on board and overnight stay.

Monday: Island of Korčula–Island of Lastovo

About three hours by boat from Korčula lies the island of Lastovo, which for decades has been closed to foreign visitors, as there was a military base here during the time of the former Yugoslavia. The island has therefore been able to preserve its original character and is a true oasis of tranquillity with lush Mediterranean vegetation. The archipelago was declared a nature park a few years ago (entrance fee approx. € 4 per person, payable on site). First we moor in the bay Sveti Mihajlo near the village of Lastovo, where you have enough time to explore the village, which is about 1,000 m away from the pier. After lunch on board, we head for the deeply incised Velo Lago bay, where we also spend the night.

After a swimming break and lunch we head for the second "forbidden" island of our trip – Vis. Like Lastovo, Vis was closed to foreign visitors until the end of the 1980s. Where once the runway of an air force base has been, wine is now cultivated. The tunnel-like submarine bunkers that can be seen here are also interesting. Once built as protection against "enemy powers", today they only serve fishermen as protection against storms. We spend the night in the harbour of Vis, the main town of the island, which lies in a deeply incised, protected bay. Vis is a charming little town with romantic alleys and cafés. In one of the many quaint konobas you can end the evening wonderfully.

Wednesday: Island of Vis–Island of Biševo & Blue Cave–Island of Hvar

Only a few nautical miles from Vis lies the islet of Biševo with the famous "Blue Cave“ (Modra Špilja). Around noon, the sun's rays, which enter the cave through an underwater opening, are reflected by the white seabed and bathe the cave in blue light. However, this unique spectacle can only be observed when the sea is calm. The trip into the cave takes place with small boats, entrance inclusive boat trip approx. € 10 (July/August € 14) per person, payable on the spot. After visiting the Blue Cave, we set course for the island of Hvar. For the overnight stay, we will drop the anchor in one of the numerous lonely bays in the vicinity of Stari Grad. These bays captivate with their turquoise-green colors, framed by the rich green of the pine forests all around. A true paradise for naturists.

Thursday: Island of Hvar–Island of Šolta

Before breakfast you can take the opportunity to enjoy a refreshing bath in the morning, to get fit for the day. Then we will sail to the nearby town of Stari Grad, the oldest settlement on the island of Hvar. Stari Grad (translated: old town) was once the capital of the island, still today well preserved sights like the Hektorović Palace testify to the splendour of long ago times. However, Stari Grad was able to preserve its role as the centre of the island's viticulture. You will have about two hours to explore the town, before we set course for the island of Šolta. Šolta is one of the smaller Dalmatian islands, and it is known among connoisseurs for its first-class dark olive oil. We anchor in one of the uninhabited bays of the island of Šolta, where we also spend the night.

After breakfast we lift the anchors again and head for the last island of our journey – Drvenik Veli. We spend our last swimming break of this trip in a bay of the small island before we return to Trogir. Even arriving in Trogir late Friday afternoon is a special experience. Then not only the motorized sailing boats and motor yachts return to Trogir, but also countless chartered sailing yachts and catamarans. When they all pass the fortress tower "Kamerlengo", there are many unique photo motives. After mooring, let yourself be captured by the unique atmosphere in the alleys of the old town, which is not without reason called "museum town“, and is under the protection of the UNESCO. Guided sightseeing tour through the old town, afterwards dinner on board and overnight stay.

After breakfast, disembarkation until 9 am.
Notes:
* Whenever possible, encounters and overnight stays with groups of other ships will be avoided.
* If the temperature is high at night, it is necessary to stay overnight in places with electricity or to run the generator during the night, otherwise the air conditioner will not operate during the night.
* In case of bad weather or rain, harbour stays in the overnight resorts will be extended, as (sun) bathing is not possible anyway.
* The route described here is an example. The route can be adjusted according to the weather and local conditions. The captain will design an interesting route that meets the wishes of nudists.
* Nudism is possible on the sun deck (also during the trip), in lonely bays and at (unofficial) nudism beach sections.
* Nudism is not allowed in the saloon or at the entrance to harbours, and at least swimwear must be worn.
What's included…
* 8-day cruise according to the itinerary
* Full board
* Welcome snack
* Captain's Dinner
* English and German speaking representatives during embarkation and disembarkation
* Guided city tour of Trogir
﻿