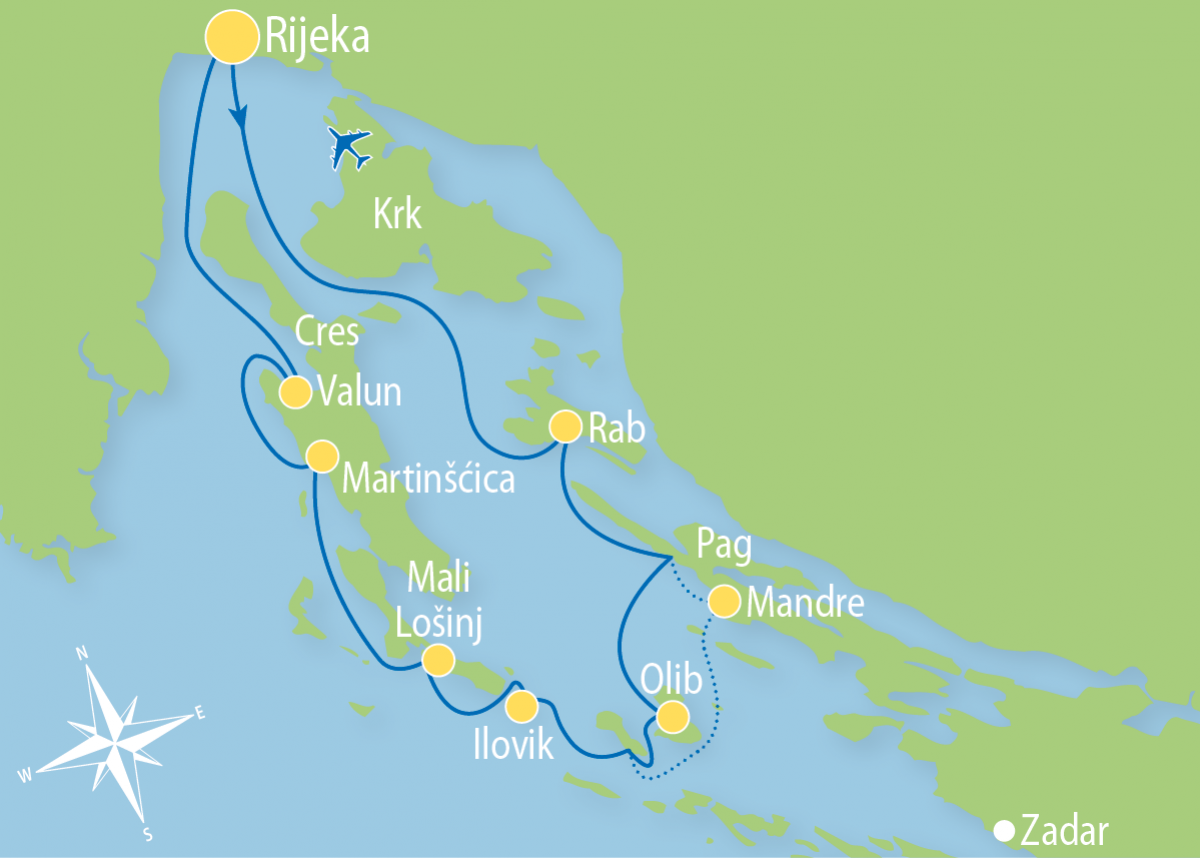 Naturism in Croatia has a tradition that stretches back over 60 years. The Koversada Naturist Complex on the Limfjord in Istria opened way back in 1961 and is one of the largest facilities of its kind in Europe. You will find beaches reserved for naturists along practically the entire Adriatic coast, not to mention numerous unofficial beaches and stretches of beach which are almost exclusively frequented by naturists. In short, naturism is very widely accepted in Croatia. So what could be more natural than to get an all-over tan on the deck of a ship, to plunge free of the encumbrance of clothing into the crystal-clear waters of isolated bays? Which is why we’ve decided to offer some special naturist cruises departing from Rijeka on certain dates on the MS Planka. The cruises head whenever possible for secluded coves for extra-long bathing breaks, so that you can happily go “déshabillé” without fear of being disturbed. True to the motto “hand in hand with nature”, the overnight stays are as far as possible scheduled for small fishing villages or secluded bays.

If you are coming by car you can drive into the port from 09:00 am. Our service team will then direct you to the garage and transfer you back to the port. Please note that embarkation time is from 11:00 am to 01:00 pm. After embarkation our representative will greet you with a welcome drink, and you will have a chance to get to know the crew and your fellow passengers. While enjoying a snack, we weigh anchor and head off for the island of Rab. On our way we call in at a secluded cove, where you will for the first time be able to dive into the beautiful waters of the Adriatic Sea. Dinner on board in the cove before proceeding to the town of Rab. The old town of Rab with its striking bell towers extends along a narrow and rocky peninsula, surrounded on three sides by water. Three roads run through the old town – the “Low Road” with its cafés and bars, the "Middle Road" with boutiques, souvenir shops and ice cream parlours, and the “High Road”, which leads to the four churches with their impressive bell towers.
The port of embarkation for passengers arriving by plane depends on the flight schedule. With transfer booking via I.D. Riva Tours and flight arrival to Rijeka airport until 11:30 am, embarkation in the port of Rijeka is guaranteed. Passengers arriving later will be transferred to the first port of call for embarkation.

After breakfast there will be time for a short stroll through the town before we depart from Rab for the island of Pag. There follows a break of several hours for bathing in one of the scenic coves and lunch on board. We then weigh anchor once again and set a course for the island of Olib, arriving in the evening hours. Olib belongs to the Zadar-Archipelago and has only about 150 permanent residents, who mainly earn their living from olive-growing and a little agriculture. In recent years, the islanders have returned to some traditional ways, including the ancestral extraction of sea salt without salt works and the use of seaweed to make cushions and mattresses. There follows dinner on board and overnight stay in Olib. In the event of an unfavourable wind (Bora) the overnight stay will be in Mandre on the island of Pag.

We depart from Olib and head off on a short cruise to the Bay of Sveti Ante on the island of Silba. There follows an extended break for swimming, sunbathing and lunch on board. We arrive at the island of Ilovik in the evening hours and drop anchor in the small harbour there. The small island, only 5.5 km² in size, is characterised by Mediterranean macchia, evergreen forest and olive groves. The place itself is bathed in every imaginable colour of the widest possible range of flowers, oleanders and palms. Ilovik is therefore also rightly known as the "flower island". There follows dinner on board and an overnight stay.

Tuesday: Island of Ilovik–Island of Lošinj

After breakfast we head to the island of Lošinj, which is not only renowned for having 300 cloudless or only slightly cloudy days per year but is also covered with dense pine forests. With a little luck we may be able to watch dolphins playing in the waves, since the waters around the island of Lošinj are home to more than 220 dolphins registered with the “Adriatic Dolphin project”. We then set sail for a secluded cove of the island of Lošinj with crystal-clear waters. There’s lots of time for swimming and sunbathing, broken up by lunch on board. We then proceed to Mali Lošinj, known for its lovely port and seaside promenade. There follows dinner on board and an overnight stay.

We depart from Mali Lošinj after breakfast and cruise to the neighbouring island of Cres, which is connected with the island of Lošinj at Osor by a swing bridge. Striking features of the island include the endless olive groves and countless flocks of sheep. It isn’t for nothing that lamb is regarded as one of the specialities of the island of Cres. Once again a beautiful bay awaits us where we spend the better part of the day and also take lunch. Today's destination is the peaceful little village of Martinšćica on the island of Cres, where we also have the opportunity after dinner on board to enjoy moonlit (nude) bathing. Overnight stay in Martinšćica.

Departure after breakfast, with the aim – and how could it be otherwise? – of spending the sunny day in one of the numerous coves. Today’s destination is the fishing village of Valun on the island of Cres, where the popular Austro-German television series “Der Sonne entgegen” (“Toward the sun”) was filmed in the mid-1980s. The day is rounded off by the Captain's dinner and an overnight stay in Valun.

Our last day in the beautiful island world. We leave Valun and drop anchor one last time in a bay about half an hour’s voyage away. After lunch and what will by then have become the customary break for swimming and sunbathing, we set a course for Rijeka. There follows dinner on board and an overnight stay in Rijeka.

After breakfast, disembarkation until 9 am.
Note:
* Whenever possible, encounters and overnight stays with groups from other ships will be avoided.
* If the night-time temperatures are not too high, the overnight stay in Mali Lošinj on Wednesday will not take place. We will instead stay in a secluded bay and visit Mali Lošinj for about two hours on Thursday morning. The same applies to Valun on Thursday. Overnight stay in the Bay of Nedomisje, not far from the town of Cres, and a visit to the town of Cres on Friday morning.
* In the event of high night-time temperatures we will have to stay in places with an electrical hook-up, or the generator must be running during the night, because otherwise the air conditioning will not work during the night.
* In the event of bad weather or rain, port stays in the overnight stay locations will be extended, since (sun-) bathing will in any case be impossible.
* The route described here is an example. The route can be adjusted according to weather and local conditions. The captain will design an interesting route that meets the wishes of nudists.
* The route can also be sailed in the opposite direction.
* Nudity is permitted on the sun deck (also during the journey), in secluded coves and on (unofficial) naturist beaches.
* Nudity is not allowed in the saloon and when sailing into port, and bathing costumes must be worn as a minimum.
What's included…
* 8-day cruise according to the itinerary
* Full board
* Welcome snack
* Captain's Dinner
* English and German speaking representatives during embarkation and disembarkation